Children’s hospital leadership teams and their roles are evolving so their organizations can stay ahead, achieve their goals and do what they do best—caring for others.
By Megan McDonnell Busenbark Published July 23, 2021 6 min. read

Few people grow up dreaming of becoming a worrier for a living. But about a year ago, that’s exactly where Maureen “Mo” Leffler found herself—and it’s right where she belongs. “Early on in this new role, I said, ‘I think this title, the CWO, means chief worrying officer,’” says Leffler, D.O., M.P.H., who often goes by Dr. Mo. “I feel worried about our people.”

Leffler became the first enterprise-wide CWO—chief wellness officer—at Nemours Children’s Health in July 2020, 16 years after she joined the system as an intern. Now, this pediatric rheumatologist has turned her full attention to this executive charge, transferring her experience in patient care to the care of Nemours’ employees in a systems-based approach to well-being for the team.

“The goal is to intervene at the system’s level, to get the barriers out of the way, so individuals who show up in medicine—because they’re altruistic, compassionate, hardworking, resilient and dedicated to our patients and families—can do what they’re trained to do and do what they do best,” Leffler says.

Leffler holds check-in meetings and grand rounds lectures to take the pulse of the team and provide counsel and support, particularly in the face of ongoing COVID-19 pressures. She has also shifted documentation from physicians to other team members, allowing for more face-time with patients while accelerating administrative tasks. She is also working to implement simple changes of convenience, such as improving workstations.

The role of chief wellness officer began cropping up in health care systems in the last few years. In 2017, Stanford Medicine in California became the first academic medical center to add a CWO, in large part to address burnout among physicians and staff.

But Leffler says it’s so much more than that. “Burnout is an occupational health hazard—but not being burnt out is not good enough,” she says. “The goal of the chief wellness officer is to promote professional well-being, which is characterized by having everything in place in both the individual and in the system, so those two things work together optimally. When we do that, we can provide the highest quality of care, the safest care, the best care. We can derive meaning in the work we’re doing.”

Shifts in the C-suite

Leffler’s CWO role at Nemours is one example of the emergence of new C-suite positions within many children’s hospitals. The trend signals an even deeper commitment to enhancing hospital performance and experience, and it involves reimagining and elevating some of the traditional roles across the health system—from clinical excellence and people management to operational efficiency and diversity and inclusion.

Children’s hospitals are far from alone in this leadership evolution. The C-suite is transforming across industries, as disruption demands that all organizations think, work and care for those they serve in new and different ways. And the C-suite must be structured to rise to the challenge, according to global professional services firm Ernst & Young (EY). The firm’s data indicates 82% of CEOs added a C-level position in the last five years. The additions indicate three new C-suite priorities across industries: innovation, digital and strategy.

Rick Merrill, president and CEO of Cook Children’s Health Care System in Fort Worth, Texas, says the C-suite also should be organized judiciously—for several reasons: “First, having too many chiefs is comparable to having too many cooks in the kitchen,” he says. “It’s important to have a leadership structure that allows the organization to have a direct line of sight with and clear communication from the leadership team.

Second, he says the proliferation of the chiefs title has not gone unnoticed by frontline staff, who expect the leadership team to hold to the same staffing discipline to which everyone else is being held.

“That said, I think the chiefs title can help significantly in advancing key strategies and initiatives within an organization,” Merrill says. Two examples of such titles at Cook Children’s are chief of staff and chief of diversity, equity and inclusion.

A tale of two titles

When Merrill first arrived at Cook Children’s in 2007, he believed a lean and flat leadership structure was critical for success. Nearly 15 years in, he still does. But as the system has grown over the last 10 years, he noticed some gaps—including delayed decision-making and a lag in execution time against some key strategies.

To fill those gaps without adding layers of bureaucracy, he hired a chief of staff—someone who carries the full weight of the Office of the CEO and coordinates with leaders throughout the system to accelerate projects and progress.

“Many organizations have a chief executive officer, chief operating officer, chief financial officer—and then there’s another layer of executive vice presidents or senior vice presidents and then VPs and assistant VPs… all these layers can create complexity and bureaucracy,” he says. “Avoiding multiple layers enables an organization to make sure it can staff at the bedside, which is really the most important staffing objective.”

In the summer of 2020, Cook Children’s elevated an employee of 13 years to the role of chief of communications, diversity, equity and inclusion. A new leadership position for this system, this kind of role has been emerging as one of the more prominent C-suite additions both in and out of the health care industry.

According to LinkedIn data, the number of people globally with the title of chief diversity officer grew 68% over the last five years. And the explosion of diversity and inclusion employees overall underscores the rise of this role, which is becoming increasingly critical to an organization’s ability to innovate, grow and attract and retain talent.

Listen to all voices

As the executive ranks in many children’s hospitals continue to evolve, it’s important to listen to and learn from all of those who can help carry out the organization’s mission, according to Merrill.

At Cook Children’s, he says the medical directors of the key service lines are highly engaged and involved in strategy and policymaking. Nearly half of its system board, the governing body for all the system’s subsidiary companies, is comprised of physicians.

“It’s easy to think about the C-suite as just executives, but I think throwing the net around physicians in a meaningful way is really important to helping any hospital, but particularly a children’s hospital, navigate the uncertain waters that are in front of us,” says Merrill.

Consider experience in other industries

Amy Koresdoski is a new kind of children’s hospital leader—and living proof of what happens when an institution reimagines leadership roles. When Koresdoski joined Arkansas Children’s in 2019, it was her first foray into health care after years of experience as a senior HR executive with companies like Nissan North America, FedEx and Harrah’s Entertainment.

With a background in benefits, accounting, IT and finance, the team at Arkansas Children’s recruited her from outside the industry for the newly created position of vice president of Total Rewards. In that role, she leads the creation and implementation of a Total Rewards model common outside of health care and meant to engage the team at Arkansas Children’s in fresh, new ways.

“What we’re trying to do is create programs that help us attract, retain, and engage talent,” says Koresdoski, Ph.D., SPHR, CCP, sHRBP. “It’s great if you can attract them—but if you can’t engage and retain them, they’ll get some experience and potentially go somewhere else.”

She says the organization is also building career paths in a way for people to achieve their career goals without moving to another organization. “The job of the Total Rewards person is to create those programs that support the business strategy.”

Koresdoski has brought many ideas from her previous roles to Arkansas Children’s, such as enhanced medical plans, discount programs and pet benefits—all with little to no cost to the organization but a high ROI from employees.

And with added perks like on-site childcare and concierge services, Koresdoski is reminded often that she’s in the business of making people happy. And that makes her happy. “I want to make people’s lives easier,” she says. “And it’s very fulfilling to see people so happy with some of the things we’re doing.”

For “Dr. Mo” at Nemours, it’s all about people too. “I loved being a doctor, I loved taking care of my patients—and it was very rewarding to do that,” she says. “Now, I feel like I’m using a whole different toolbox but bringing the same care to people I work with. That’s awesome. That’s what I really care about.” 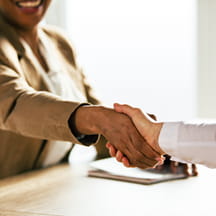