A young woman details her mental health conflicts and how she manages the challenges.
By Christine Bush Published May 04, 2021 2 min. read

"My whole life I’ve felt like an alien." That’s not an opening line from a thriller movie, but the description of how 21-year-old Javi Barria-Opitz feels about her battle with mental illness. Javi says she always had trouble fitting in with other kids. In middle school she was bullied for what classmates said were odd behaviors. Javi did things like cover her ears to avoid loud noises or hide under desks if she felt stressed.

“I kinda dealt with it,” Javi says. “No one knew what to do with me.” During a school trip to Washington, D.C., the anxious feelings became overwhelming and Javi had a panic attack. Her symptoms were so severe she sought treatment at an area hospital, but that episode didn’t trigger psychiatric care. Javi’s need for mental health care became apparent one day in high school. She can’t recall how the bad day started but knows that suddenly she didn’t know who or where she was.

Psychiatrists eventually diagnosed Javi with severe general anxiety and high-functioning autism. Her treatment started at Seattle Children’s Hospital’s inpatient psychiatric unit and she moved to a long-term facility for youth where she spent a year and a half.

The care team tried several medications and treatment approaches before Javi felt like her mental health was improving. But medication didn’t solve all her challenges. “My brain is like NASCAR on steroids,” she says. “People can’t imagine what it’s like. My mind works 24/7 going a million miles an hour and it’s really tiring.” Javi credits medication with clearing her mind so she could start the necessary work to manage her anxiety.

During a low point, Javi realized she wanted to make changes. She remembers sitting in a seclusion room and seeing her favorite nurse crying. “All of a sudden, I thought, ‘I can’t do this anymore. I can’t do this to myself, and I don’t want to be the reason people are crying.’ I thought if the nurse is crying, I can’t imagine what my family is going through.”

Javi wanted to do more to get better. With continued psychiatric counseling and adherence to her medication, she finished high school and started college. It hasn’t been smooth sailing though. Javi often feels overwhelmed or anxious and relies on the coping tools counselors and doctors taught her.

Javi attended the 2019 Speak Now for Kids Family Advocacy Day in Washington, D.C. Before the event, she wanted to focus a career on intelligence gathering. But after sharing her story with members of Congress, Javi felt a different calling. She now wants to major in communications and help advocate for kids in need.

“I want to advocate for the me that’s in the seclusion room right now. For the Javi who’s hiding under a table in the third grade because she’s scared,” she says. During the events, Javi shared her stories and view that mental health is a medical issue too. “People say it’s not a real medical condition and can’t understand why you don’t just suck it up and deal with it,” she says.

Today, ongoing therapy helps Javi handle life changes. She is determined to graduate from college on a timeline that’s healthy for her. Seattle Children’s staff counseled Javi at some of her darkest times and their advice motivates her to keep moving forward. “They taught me to help myself and let me know they believed in me. They told me it was not the end of the line for me. They helped me believe that this wasn’t the end of my story.” 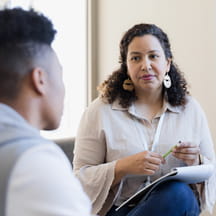 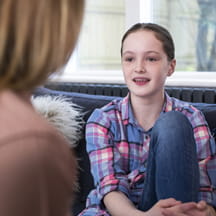 Reduce Boarding in the Emergency Department With In-Home Care