4 Patient Families Explain What Children's Hospitals Mean to Them

4 Patient Families Explain What Children's Hospitals Mean to Them

In these challenging times, it's important to remind yourself why you do what you do. These four family stories show how you make a huge difference in their lives.
By Megan McDonnell Busenbark Published Oct. 27, 2020 9 min. read

The pressures of being a health care worker were pushed to unprecedented highs this year as COVID-19 handed children's hospitals challenges they've never seen. This stress on frontline caregivers and employees, personally and professionally, takes a toll.

So perhaps there is no better time to remember the effect you have on people's lives every day. Here are the stories of four families from across the country. As they share words of love, trust and gratitude, they show how their lives are dramatically different and infinitely improved ... because of you.

Because of you, I am confident

Maddy Lavalier has accomplished much in her 12 years.

From doing radio interviews to speaking to second graders about life in a wheelchair, she advocates for children with disabilities and for the place she says has helped her become the person she is today: Gillette Children's Specialty Hospital in St. Paul, Minnesota.

"I love being in a wheelchair, and I love helping give kids a voice who don't feel like they can speak up," Maddy says.

Maddy was born with myelocystocele spina bifida. She had club feet and omphalocele, so she had organs outside her body.

She also has hydrocephalus. Her care, starting with surgery on her first day of life, has been in the hands of the team at Gillette.

Her mother, Rachelle Strasburg, recalls how that began while Maddy was in utero, when she first met the team after learning her baby would be born with special needs.

"They filled me with confidence and comfort, and I had been panicked and scared-but then I had this sense of calm," she says. "Because we get so much support, it helps us give Maddy confidence. To be able to say, 'You can do anything, you can be anything, and you have everything you need to be successful,' is not just because of us as parents. It's because of the support we received."

Maddy's father, Tom Rongitsch, says if they had not had the encounters they did with the organization, their lives would be drastically different. One such encounter was when Maddy's orthopedic surgeon, Steven Koop, M.D., asked Maddy what her goals were.

She said, "I want to walk." Even though Maddy was paralyzed from the waist down, Koop and team made it happen through a walker and braces.

"She walked by herself," Strasburg says. "They made that come true for her."

Rongitsch says it's evident the employees love what they do. "There is genuine care," he says. "And they want to make the world a better place, which means not only caring for Maddy's physical health but for her soul and her attitude."

Maddy's soul is soaring. Her attitude is in a place that is far beyond her years.

"They have helped me become confident," Maddy says. "I want them to know the community they've built for the kids who come there is very loving-and they're doing a great job."

Because of you, I can be myself

Jack Millsap spent eight years doing what kids do. He was active, climbing trees and hitting his developmental milestones.

So, when he told his parents his legs hurt, they chalked it up to growing pains. But over the next two weeks, he wasn't walking normally, and he began falling.

A trip to the pediatrician and some bloodwork sent the Millsap family to MUSC Shawn Jenkins Children's Hospital in Charleston, South Carolina-where Jack was tested for Guillain-Barré syndrome, a rare disorder in which the immune system attacks the nerves and can lead to paralysis.

While the family awaited test results, Jack deteriorated, choking on his own saliva because he lacked the muscle strength to cough it up.

In the emergency room at MUSC, the family found a medical team that was as good at listening as they were keeping the family informed. As weeks went by, Jack lost the use of his arms and legs and a Guillain-Barré diagnosis came.

And that's when MUSC, and the people in it, became home.

"He decided he wanted to sing for the nurses, but he was nervous," Chrissy, his mother, says. "One of the nurses encouraged him to sing just for her, and he gained the confidence to hold daily concerts."

It was just what he needed, Chrissy says, especially when the paralysis weighed heavily on his mind. "When you're sitting there for weeks, and you can't do anything else-all he could do was use his voice-it made a huge difference."

Chrissy says he was resigned, thinking this was how his life was going to be, and he's not going to be able to do some things again.

"So, when he started giving concerts, I saw his spirits pick back up," she says. "It was something he looked forward to every day because they were going to listen to him and cheer him on."

If the nurses were not with other patients, they dropped everything to attend Jack's performances. They pulled song lyrics up on their phones so Jack could sing word for word. Child Life specialists brought in pipe cleaners to make a microphone and headband. They all danced to Jack's renditions.

For Jack, this was his opportunity to be himself again. And these moments are etched in the family's memory.

When asked to share one thing he would want the team to know, 8-year-old Jack said, "I cherish you."

Because of you, I have peace

Aiden Shanklin was 6 months old when his mother, Nicole Horton, noticed he had poor head control-he was like a "rag doll," she recalls.

At 10 months, Aiden was diagnosed with cerebral palsy, leaving Horton devastated and confused. There were no complications during pregnancy or birth.

Aiden's Apgar score was 9. Without a cause for the diagnosis, Horton blamed herself. She couldn't understand how they had come to this place in their lives and was determined to find answers. She found them at Children's Specialized Hospital in New Brunswick, New Jersey.

Horton had taken a job at Children's Specialized while Aiden was receiving care and early intervention there, and she made it her mission to pick as many brains as possible on Aiden's condition.

When Aiden was 6 years old, she made what would be a life-altering appointment with Adam Aronsky, M.D., a developmental and behavioral pediatrician.

"He engaged with Aiden; he wanted to know everything," Horton says. "He was calm, which I loved, it was very soothing to Aiden."

It was during that visit when Aronsky recommended additional genetic testing that would reveal Aiden never had cerebral palsy—rather GRIN2B, a rare genetic disorder that mimics cerebral palsy and causes developmental delays, intellectual disabilities and abnormal movements.

"It was eye-opening; it was joyous" when the team changed the diagnosis, Horton says.

"They could have easily said, 'You already did the genetic testing,' but Dr. Aronsky believed he did not have cerebral palsy."

So, he pushed for the new testing-and found a truth that Horton had spent six years seeking.

What Horton also found was comfort in what felt like caring arms. Before an appointment with Aiden, Aronsky turned to Horton and said: "First, we're going to talk about you. How are you? I want to know how you're feeling and how you're processing this. I want you to do what you need to do, so you can do what you need to for Aiden."

Horton told him she was working on it.

"And he said, 'If there is anything I can do to help you, not Aiden, do not hesitate to let me or my staff know.' And I felt that," says Horton.

Aiden, now 9, also sees a neurologist and physiatrist at Children's Specialized—and they feel those caring arms when they walk through the doors.

"It's always the same welcoming feeling," Horton says. "There has never been a time when we haven't felt love and warmth from the staff. I could never say thank you enough. I want them to know their kindness does not go unnoticed. We always walk away feeling our child got the best care. That is hard to come by. No matter where the road takes us, I will never forget any of them."

Because of you, we have a family

It was January 2013, and Lacey Smith already had all the stress she thought she could take. She had just had surgery due to a high-risk pregnancy.

What she thought was twin girls turned out to be triplets-but due to a rare syndrome in which one baby survives off another baby's nutrients, surgery was necessary to save two of the babies. But Smith had to let one baby go.

When she returned home from the hospital, she was struck with another blow: Her 2-year-old son, Liam, had a golf-ball-sized lump on this neck. He was diagnosed with acute lymphoblastic leukemia (ALL) that same day.

"I collapsed with the news," Smith recalls.

As it would turn out, Wolfson Children's Hospital in Jacksonville, Florida, would hold her up and be her strength. When Liam started his treatment, the team put her in a bed in Liam's pediatric room, so she could stay on bed rest and with her son.

When the twins, Emma and Ella, were born at 32 weeks and stayed in the NICU, the team at Wolfson Children's provided emotional support.

When she struggled to pump because of the stress, they brought her a breast pump, helping her feed the babies while remaining by Liam's side.

"Everyone knew I had so much on my plate," says Smith. "And they didn't just treat us like a patient. The staff truly became family."

That bond would become stronger two years later, when Smith noticed Emma looked tired and pale. She, like her brother, was diagnosed with ALL at age 2. It was in this dark moment she found familiar light and love from her hospital family.

"I was at Wolfson Children's and just in shock," she says. "I saw one of the seven rotating oncologists there with the hospital president, giving a tour. He saw me and asked me what was going on. I told him we had another child diagnosed with leukemia. He walked right out of his meeting to get us in a room."

When the Smith family arrived on the hematology/oncology unit with Emma, the nurses had already gotten wind they were back.

"We're blessed we had that hospital within arm's reach," Smith says. "That amazing staff, the nurses, all the way to the janitorial service ... they would stop and laugh with us, dance with us."

In those times when laughter was elusive, like when Liam and Emma lost the use of their legs during treatment, the staff upped their game.

When Emma didn't respond to physical therapy, the team allowed Smith to bring an inflatable bounce house into her room—and it did the trick: Emma started to use her legs again. And Smith got more proof the team would do anything to make magic happen for her children.

"They do everything they can to make sure your child is healthy, and your family is getting the best care," says Smith. "It goes beyond medicine. It's checking in to say, "How are you?' A thank you doesn't do it justice," Smith says, her voice trailing off with tears. After a long pause, she adds, "I owe them everything."

These families, and 50 others, participated in the virtual 2020 Speak Now for Kids Family Advocacy Week. Through this event, families talked to legislators about their health care experiences and the roles children's hospitals play in their lives. Read their stories. 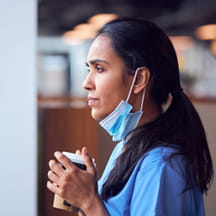 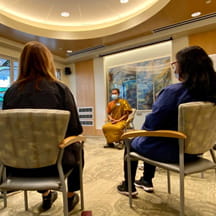 A Simple and Quick Way to Reduce Employee Stress and Burnout