How a Children's Hospital Responded to a Mass Casualty Event

How a Children's Hospital Responded to a Mass Casualty Event

A man opened fire into a crowd of concertgoers in Las Vegas on Oct. 1, 2017, killing 58 people and injuring hundreds more. Sunrise Children’s Hospital was the closest hospital to the event, and staff supported the adult facility during the crisis.

When Kathy Donovan arrived at the emergency department (ED) at Sunrise Hospital and Medical Center the night of the mass shooting, she did not know what she and her colleagues were in for. At the time, Donovan, RN, M.S.N., B.S.N., NE-BC, was the chief operating officer (COO) at Sunrise Children’s Hospital.

“Me and my counterpart from the adult hospital were lost,” Donovan says. “We were standing there in the ED, looking at each other, chaos all around us. Then an ED attending physician with past military experience walked in; he took over and told me to get out of the way. He became the commander of the ED.”

At the 2019 Annual Leadership Conference, Donovan, who is now COO and chief nursing officer (CNO) at SSM Health Cardinal Glennon Children's Hospital in St. Louis; and her colleague Courtney Ogle, M.S.N., RNC-NIC, who is assistant CNO at Sunrise Hospital and Medical Center, recounted how the night’s events unfolded. “Never in my life would I have thought I’d be in this situation,” Donovan says. “We all drill for it. We all prepare for it, but you never think you’ll experience it.”

Sunrise Hospital and Medical Center, which includes the children’s hospital, has a busy ED that sees 170,000 visits annually—teams there are used to high volumes. “But this was different,” says Ogle. “People at the concert were Googling the closest hospital to the Las Vegas strip, and that’s how they found us because most of them were from out of town.”

The hospital runs at 98% capacity, and about 100 patients in ED wait for a bed, so the hospital was at capacity that night. “There was no room, and we were discharging people constantly and doubling and tripling patients up in single rooms,” Ogle says.

The hospital had no system to send out a mass alert to staff other than a phone log, but employees showed up. When they saw the news and social media, over 100 doctors and 200 nurses arrived at work. Medical teams performed 83 surgeries in 24 hours.

Teams also deployed 50 crash carts in one hour—the hospital used up its ED supplies almost immediately. The organization’s sister hospitals were called upon to provide more supplies. “There were not enough couriers, and streets were blocked off, so we were sending people in pickups to load supplies and equipment to bring them back to Sunrise,” says Donovan.

While the chaos was unfolding at the adult side of the hospital, the children’s hospital opened its command center and cleared two floors by discharging as many patients as possible so the adult patients could be admitted. “Pediatric staff took care of adult patients and treated them like they were our own,” says Donovan.

Some of the biggest lessons learned, Donovan says, were around communication. “I was talking to docs on Facebook Messenger because the cell service locked up,” she says. “Whatever your emergency plan is, stick to what you drilled—no matter what.”

There was also a huge emotional toll. “A few of us in leadership have since left the hospital, for various reasons,” Donovan says. “I left because this showed me what’s important in my life and where I needed to be—back home. It readjusts your lens about how you think about your life.” 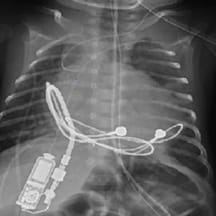 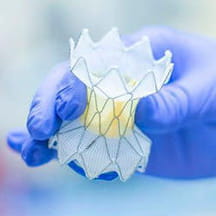 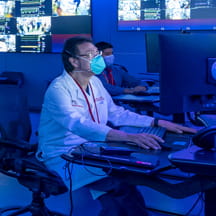