Organ donors are escorted to the operating room by the family, as the hallways are lined with doctors, nurses, specialists and other hospital staff paying their respects.
Published June 12, 2019 2 min. read

What struck Ashley Wood, RN, B.S.N., CCRN in the pediatric intensive care unit (PICU) at UC Davis Children’s Hospital in Sacramento, California, about an organ donor’s parents was their incredible selflessness. They had just endured an unimaginable loss—their daughter was declared clinically brain-dead after an accident. Wood couldn’t believe their first reaction to the news.

“The family immediately wanted to talk about organ donation,” Wood says. “It’s not very common in pediatrics that the family brings it up, so I knew right then that the family was really special. I just knew that I had to do something special for this family.”

Wood had recently seen an online photo of a Chinese hospital performing an honor guard procession to pay respects to a pediatric patient who was being wheeled into the operating room for organ donation surgery, and it clicked—she was going to bring an honor guard to UC Davis Children’s.

Solemn ceremony for all involved

The honor guard ceremony is not unlike processions held for fallen police officers or military personnel. Hospital workers of all disciplines—doctors, nurses, specialists, therapists and hospital support staff—line the hallway from the PICU to the operating room where the organ donor patient will give the ultimate gift of life. The patient’s family often walks alongside their child’s bed as it’s wheeled down the hallway past those paying their respects. It is a solemn and emotional procession for all involved, Wood says.

“Everyone stands in silence. Some are bowing their heads, some are crying,” Woods says. “Even if you never cared for that patient, there is a patient you think about when they walk by, and it allows you to reflect on that patient, if even for just a moment.”

The reason for the honor guard procession is to pay respects to the organ donor and his or her family. Wood says she’s always blown away by the selflessness of the patient’s parents at these times. The hospital has received overwhelmingly positive feedback from families on the honor guard. So much that UC Davis Children’s Hospital has extended the practice from the PICU to the rest of the hospital.

Wood says the honor guard has helped families cope during these difficult times, realize the enormity of their child’s gift and the high regard with which those in health care hold these donors. But she didn’t anticipate how healing the ceremonies would become for those in attendance.

“I underestimated the therapeutic feeling of the honor guard,” Wood says. “The focus of the honor guard is the family, so I didn’t think about the staff but it allows them to fill their emotional cup and re-energize themselves in a way.”

Viral internet videos have made organ donor honor guard processions a more common practice, although Wood believes they are more likely to be private in children’s hospitals.

“When you see these viral videos, most of them are adults because it’s easier for the public to grasp,” Wood says. “I think we’re still doing it in the pediatric world, but I just don’t think we’re sharing it as much.”

In total, UC Davis Children’s Hospital has held about 40 honor guard processions and Wood says each one is emotional and special. Still, she has never forgotten that young girl and her family in the fall of 2016.

“That first one was so powerful because the family went through a sudden tragedy and it happened so fast that their selflessness is something that sticks with me,” Wood says. “To have that ability to think outside themselves at that time is just so powerful.” 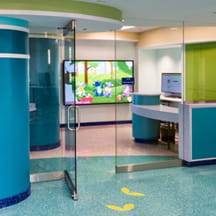 An Accessible Way to Help Families With Technology Needs