In 2015, the Alarm Management Committee at Children's Hospital of Philadelphia (CHOP) began work on mitigating the issues of alarm fatigue and alarm management to address the 2016 Joint Commission National Patient Safety Goals of improving the safety of clinical alarm systems. The project focused on implementing a safe system for alarm management with an overall decrease in alarm fatigue in the Neonate/Infant Intensive Care Unit (N/IICU).

The N/IICU team's first step was to review the alarm system settings. The settings were configured in a way that did not account for the specialized patient population in the N/IICU. CHOP's alarms system was based on age profiles, resulting in only one usable profile for the unit. This blanketed approach did not allow for thoughtful alarm management for most patients, ranging from premature infants to full-term infants on ECMO, with expected variations in parameters.

The team modified alarm setting profiles to reflect the physiological ranges for parameters suited to the patient population. The new alarm profiles were created with a focus on the patients' diagnoses as well as gestational ages.

Locating the source of alarm

The second step was to evaluate the technological capabilities of the cardiorespiratory monitor with the Biomedical (Biomed) Department. After meeting with Biomed, the N/IICU team learned the changes they could make within the system were limited to varying the urgency level of an alarm, extending the duration tolerated for a desaturation alarm, and limiting which alarms come through on secondary notification. Staff had concerns about accurately locating sources of alarms, leading to testing a secondary notification system.

After a trial of secondary notifications, where alarms sounding at the bedside were sent to nurses' ASCOM phones led to an increase in the alarm burden, the N/IICU team sought a better way to approach alarm management. As a result, an effort between the N/IICU and the Human Factors teams explored ways to improve the system for safe secondary alarm notification.

The Human Factors team identified the N/IICU as a complex socio-technical system, which is a human-centered system with social and technical factors that need to have effective interactions for optimal system performance. The socio-technical system model was used to formulate plans for effective secondary alarm notification within the confinements of the technology.

Signal detection theory (SDT) states human ability to detect a signal is dependent on the intensity of the signal as well as the amount of noise in the environment. SDT informed the N/IICU team's approach: Improve human sensitivity to actionable alarms and signals by reducing the number of non-actionable alarms (false alarms) that may deteriorate the ability to effectively discern signal from noise. This improvement drove the secondary aim: Decrease the cognitive burden of the N/IICU nursing staff caused by frequent non-actionable alarms.

After initial assessments, the first test of change introduced a delay between the alarm sounding at the monitor to the secondary alarm sounding at the nurses' ASCOM phones. This delay was trialed in eight beds in the N/IICU to determine feasibility and effectiveness. The team conducted three separate tests to evaluate three distinct time delays: zero, 10, and 30 seconds.

Staff members said the system was slightly more effective compared to the zero-second delay. Understanding that greater improvements could be achieved, the team conducted further observations of nursing workflow, including time-motion studies of nurses' response to alarms.

Through these observations and analyses, the team determined a 30-second time delay would be the most effective. Thirty seconds was an appropriate amount of time for nurses to direct their attention to the alarm sounding at the monitor and make a decision regarding if it's actionable or non-actionable. The team assessed this intervention to be the most effective at identifying alarms that needed to be addressed without significantly affecting perceived workload.

After trialing these interventions, the team decided to pilot a secondary alarm system using a 30-second delay between the alarm sounding at the monitor to it being sent the to the nurse's ASCOM phone in the N/IICU.

To quantify these recommendations, over the course of three months, the Human Factors team and the safety and quality specialist dedicated to the unit observed 28 patients. Through these observations, they determined 82 percent of alarms nurses experienced on the unit were non-critical or non-actionable, nuisance alarms that would automatically be sent to a nurse's ASCOM phone without the implementation of a time delay.

The 30-second delay would reduce the number of non-actionable alarms via secondary notification by 82 percent. By implementing the 30-second delay solution, nursing staff members were given enough time to detect the alarm, attend to the patient, and take appropriate action before a secondary page was sent to their ASCOM phone.

During the pilot test of the 30-second delay solution, only two critical alarms reached the secondary notification level. In these instances, the patients were on isolation precautions, which meant the bedside nurse had to don personal protective equipment before entering the room.

The Human Factors team's final recommendation was the N/IICU implement the 30-second delay for secondary alarm notification. By implementing this, the number of non-actionable, nuisance alarms were significantly and safely reduced, which had a positive effect on the nursing staff members' perceived effectiveness of the system and reduction of their perceived workload. 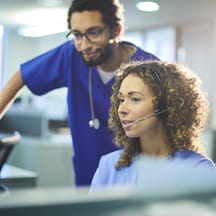