Here’s a look at why an accurate count of kids across the country matters.
By Megan McDonnell Busenbark Published April 26, 2019 9 min. read

It's the children whose parents rely on Medicaid for health care. It's the little ones from low-income families who look to Head Start to enhance their cognitive, social and emotional development. And it's the women and children at risk of malnutrition who receive food, nutritional education and other services from Women, Infants and Children.

This is a snapshot of the children and families who can lose out when young kids are undercounted in the U.S. census. And children's hospitals that use census data for everything from research and quality improvement to needs assessments and staffing decisions, lose too, as they work to meet the health and development needs of their patients.

"Having good data is the cornerstone of good decision-making in public health," says Doug Strane, M.P.H., a research project manager at PolicyLab at Children's Hospital of Philadelphia. "And the census is the best way for us to have of understanding the populations we serve."

Andrew Beck, M.D., M.P.H., associate professor in the Department of Pediatrics at Cincinnati Children's Hospital Medical Center and the University of Cincinnati College of Medicine, says so many of the kids the hospital sees in its clinical settings rely on public benefits and public support that have their origin in accurate census data. "Without an accurate headcount, I'd be really concerned that supports for programs and resources our patients rely on would be inadequate."

Case in point: A report from the George Washington Institute of Public Policy shows annual lost Medicaid funds are anywhere from $533 to $2,309 for each person uncounted by the census, depending on the state. Since Medicaid provides coverage to 37 million of children in the U.S., an undercount would affect states' ability to meet children's health needs, according to Strane. And this is just one example of the importance of getting an accurate count of kids in this country.

The importance of the 2020 Census

The once-a-decade population and housing count of all 50 states takes place early in 2020 and will determine how and where federal funds will be distributed for years to come—underscoring why the undercounting of kids is a major issue for children and their families.

"Between 2021 and 2030, which is when we'll be using this 2020 Census data, the federal government will give out about $25 trillion to states and localities," says William O'Hare, Ph.D., a demographer and data consultant with a focus on children. "The fact that young kids are missed at a higher rate means they're going to be the most penalized by an undercount in the census in terms of getting their fair share of federal dollars."

The U.S. Census Bureau reports the undercount of young children has increased over the years, from 1.4 percent in 1980 to 4.6 percent in 2010. In the 2010 Census, there was a net undercount of about 1 million children ages 0 to 4 years old. This includes children who were double counted, for example, where parents have joint custody and count one child twice or families with two homes respond to the census from both locations. In fact, the true representation of undercounted children in 2010 was about 2.2 million, according to O'Hare.

Why are kids missed? It ranges, from children living with multiple families or at an unregistered address to those living with families who rent or who are hesitant to participate in the census. O'Hare says sometimes, it's just a matter of a parent not realizing he or she should include a baby or young child when responding to the census.

In the 2010 Census, there was a net undercount of more than 10 percent of young children—that's one of every 10 children ages 0 to 4, or about 2.2 million, according to William O'Hare, Ph.D., a demographer and consultant with a focus on children. This figure includes newborns, babies, toddlers and young children in day care or pre-K programs. Karen Deaver is with the U.S. Census Bureau. As program manager for the undercount of young children in the 2020 Census, she is leading a charge to get a more accurate count of kids next year.

Here are some of the changes she says the Census Bureau is making to help, and her tips for what children's hospitals can do to encourage parents and families to participate in the census.

What the Census Bureau is doing:

What the data can do

Beck, who uses census data for research and quality improvement, will rely heavily on the 2020 Census data to inform his work. "It is unbelievably important—I can't underscore it enough," he says. "We rely on the census to provide us with an estimate of the number of local children. The closer this is to a 100 percent count, the better we can be at designing changes to our care practices and supporting community-based interventions in ways that meet the needs of those children. The census count provides us with a population denominator, quantifying the number of children within our region to whom we must hold ourselves accountable."

Tracie Smith, M.P.H., is the director of population health analytics at Ann & Robert H. Lurie Children's Hospital of Chicago. She contributes to needs assessments for the hospital's Health Communities program. This program partners with community leaders and organizations to advance health equity and to create healthier futures for the children of Chicago, where life expectancy at birth varies 17 years depending on the neighborhood you live in. The Health Communities program has various focus areas, which currently include preventing violence, obesity, underage drinking and unintentional injury, as well as promoting child health and safety and improving resilience and mental health.

Smith looks to census data to help perform the hospital's needs assessments, to understand the needs of the communities the hospital serves and where those needs live and breathe. "The kids who are being missed are the kids we need to understand where they are so we can target resources to those areas," says Smith. "There could be areas that go undetected because if the kids aren't counted, we're not even looking at that area as a potential problem area." Lurie Children's doesn't want to miss an area that has an undercount because the hospital wants to make sure those kids and families are getting what they need. It also determines what intervention the hospital uses.

Smith says she and the team rely on the American Community Survey (ACS), an ongoing national survey from the Census Bureau that samples approximately 3.5 million addresses across the country annually. "The ACS helps with getting a landscape assessment of the neighborhood, like how many children are there, how we describe the community and how we can best help," says Sana Yousuf, M.P.H., epidemiologist with the Healthy Communities program at Lurie Children's. "We also use it to get an idea of what gaps need to be filled."

The ACS data helps the team plan for the future of the program, from identifying communities in the Chicago area where they should expand and extend their services, to how they should allocate staff to best serve children and families in those communities. The data also can help them evaluate the effect of their interventions over time. Yousuf and Smith agree that while the ACS is valuable in informing their work in an ongoing way, the 2020 Census data will provide them with a more accurate view of the population given the larger sample size.

Beck and the team at Cincinnati Children's use census data in their work for the Children's Community Health Initiative, which is focused on improving population health outcomes. "One of our population health improvement strategies has involved taking a deep dive into two local neighborhoods," he says. "We are working with partners to reduce the days in which kids from those neighborhoods spend in the hospital." Beck's team tracks these utilization rates on a month-to-month basis. Their numerator comes from data within the health care system, but the denominator comes from the census. "We track our progress because the census provides us with an estimate of all children living within these neighborhoods." he says. "In turn, we're able to determine whether we're improving outcomes and narrowing gaps."

Beck says the team is also using census data to begin to understand contextual risks that may warrant different types of testable interventions. The data is also helping them look at different partnerships with community-based organizations or leaders to think through the contextual factors that may be driving the disparities the team is trying to close.

Getting creative to get the right counts

Ayesha Cammaerts, manager of programs and population health in the Office of Community Health at Boston Children's Hospital, appreciates the value of census data in needs assessment, planning and implementation. "If you don't have the census data, you don't know if a population has changed in a particular area," she says. "And you don't know if there are higher rates of certain illnesses."

Still, Cammaerts knows all too well the problems that come with undercounting kids—especially kids who are not yet school age. So, she and the team at Boston Children's tap into multiple sources for intel to guide their efforts. "We've been fortunate to have access to a number of city and state public health data sets, which include census data in their analysis," she says. "These reports include the annual Health of Boston Report. Based on these resources, we've been able to do a layered data analysis to inform our needs assessment."

Cammaerts says the team also works with community-based organizations. The groups partner to gather data from the residents and leaders in the priority neighborhoods they work with to have an on-the-ground knowledge of the health needs of children and families there.

While the U.S. Census Bureau is more cognizant of counting kids this time around, strapped resources at the bureau may make it a challenging task. For the 2020 Census, limited resources have resulted in the cancellation of some testing that could have worked out the kinks in counting methods across different kinds of communities before the census launches.

Also, families who may be hesitant to participate present another challenge to ensuring kids are counted in the census. But there are things children's hospitals can do to encourage families to make sure their kids are counted no matter what their hesitancy. "Children's hospitals are trusted members of society," says Beck. "We could be well-suited to be a voice of encouragement for participation." This includes posting signs in a waiting room or a physician's office, to developing relationships with census counters and volunteers. Cammaerts agrees signs can help, though she adds one consideration. "It's challenging to be in a position of authority," she says. "But primary care providers and community health partners that work with pediatric hospitals can be a link for folks out in the community."

Cammaerts says children's hospitals and pediatric institutions partner well with other community-based organizations that orient themselves to family support. "They have a role to share in this, and they are in a position to say, ‘Please do this (participate in the census), and answer as many questions as you can. This is something that will make a difference. It can make things better for your community.'"

We can only help those we can find

Achieving equitable health outcomes for all children in the U.S. is reliant on knowing where the children are so they can get the care and services they need. "Uncounted children won't get our help if we don't know they are there," says Strane. "As it stands, we're risking a situation in which some children won't be counted in the 2020 Census because of the economic or geographic circumstances they were born into. And if they're not counted, they'll have a harder time accessing services that can help kids surmount early disadvantages." 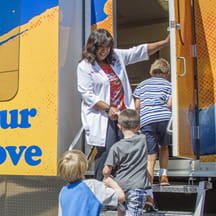